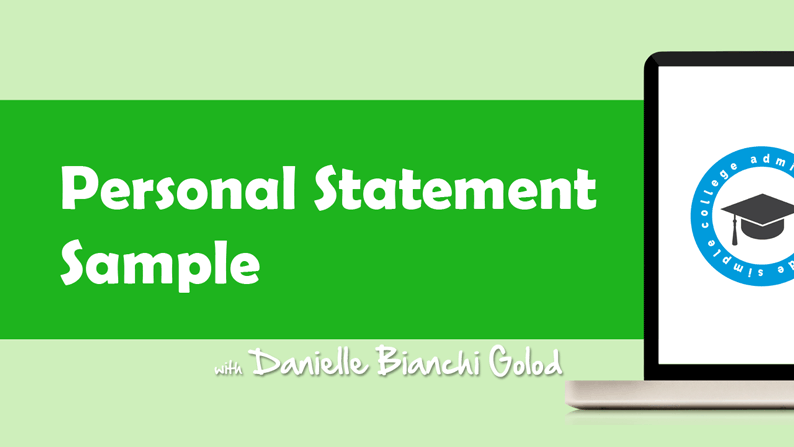 Following up on examples of how to begin and end your personal statement, I wanted to post another great beginning and ending from one of my private counseling students.

I am not scared of heights, crowds, closed spaces, spiders, or snakes.  My pulse hardly quickens when I get up on stage in front of hundreds of people and speak, sing, or act.  But for a year every Saturday my palms would start sweating in anticipation of Sunday afternoon at 2:30.

At the time I had played the bassoon for four years.  I practiced occasionally and managed to put up with all the harassment one gets for playing the bassoon (Is that a baboon, bazooka, or buffoon?  Is somebody farting or is that a dying duck?)  I had played in beginning and intermediate youth orchestras for most of my career as a bassoonist, but nothing prepared me for the California Young Symphony (CYS).  I had auditioned against the will of my teacher who thought I would not handle such a serious orchestra.

…My senses seemed to shut down and leave everything up to my fingers.  Thankfully my fingers knew the passage cold.  When the piece was over, I stood (with only a little difficulty) at the beckon of Mr. Eylar’s stick and received the applause from the audience.  I had played well and almost enjoyed the experience.  I was no longer that nervous bassoon player.  I was becoming a musician.

This year in CYS, we are playing Rimsky-Korsakov’s Sheherezade.  As a result of more maturity and practice, the music makes sense to me.  It has a passionate story behind it that I must communicate to the audience.  For the first time I am making black ink on paper come alive.  The cumbersome reed and the difficult fingerings no longer get in the way.  The bassoon robbed me of my confidence but has returned it doubled.

Now, it goes without being said that copying someone else’s work is a no-no.  Not only are you selling yourself short, you are setting yourself up for defeat.  Trust me when I say that school admissions officers are smarter than you think.  It is very easy to use a service like Copyscape to find copied text….in seconds.  So, do yourself a favor and do your own work.